How Do Organisms Reproduce

Fission means division of the parent cell divides into two or more cells. Depending on their cell structure unicellular organisms show different patterns of cell division. Some are directional while others are non-directional. For example, amoeba can divide itself into two at any plane but the division in euglena is longitudinal. Fission can be of two types, namely, binary fission and multiple fission.

Multiple fission is also an asexual method of reproduction in organisms. In multiple fission, the parent organism splits (or divides) to form many new organisms at the same time.

Process of multiple fission
During unfavourable conditions, a cyst or protective wall is formed around the cell of a single-celled organism.

In budding, a small part of the body of the parent organism grows out as a ‘bud’. It detaches from parent body upon maturation and becomes a new organism. Hydra reproduces by the process of budding by using its regenerative cells. (In Hydra, first a small outgrowth called ‘bud’ is formed on the side of its body. This bud then grows gradually to form a small Hydra by developing a mouth and tentacles. Then after hydra gets fully matured, the tiny new Hydra detaches itself from the body of parent Hydra.Thereafter it lives as a separate organism.

Spores are small bulb like structures which are covered by thick walls. In spore formation, the parent plant produces hundreds of microscopic reproductive units i.e.spores. When the spore case or sporangium of the plant bursts, then the spore spread into air. Under favourable condition, like during damp and warm condition, the air-borne spores land on food (or soil). Thereby, they germinate and produce new plants. Example :Most of the fungi like Rhizopus, Mucor, etc., bacteria. 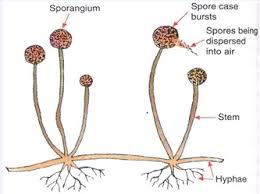 In some organisms (plants as well as animals), in case theorganism is somehow cut or broken into many pieces, each piece grows into a completely new organism. The process of getting back a full organism from its body parts is called regeneration. Planaria possesses great power of regeneration. Planaria is flatworm which is found in freshwater ponds and slow-moving streams. Similarly, when a lizard loses its tail, it grows a new one. 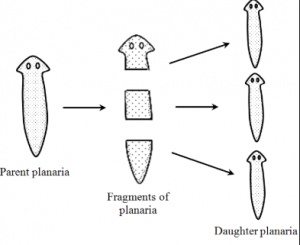 Upon maturation, the body of a simple multicellular organism like planaria, spirogyra, etc. breaks up into two (or more) pieces. These pieces or fragments grow into new individuals.This mode of reproduction is known as fragmentation. This process occurs under favourable condition of moisture, light and the nutrient availability. The organisms like spirogyra and sea anemones can reproduce by the method of fragmentation.

Instances of Vegetative Propogation are :