How Do Organisms Reproduce

Some plants reproduce asexually but the majority of the flowering plants reproduce sexually. Both male and female gametes are produced by flowers, which is the reproductive part of the plant. Sexual reproduction takes place in flowers in plants. The main parts of a flower are:

Based on whether a flower consist of stamen or pistil or both can be either unisexual or bisexual. Rose, China rose are bisexual flowers is composed of all the four parts whereas, the plants like papaya and cucumber produce only unisexual flowers.

PROCESS OF SEXUAL REPRODUCTION IN PLANTS

The sexual reproduction in plants takes places in the following steps:

It is the transfer of pollen grains from the anther of a stamen to the stigma of a carpel. In this way, male gametes in pollen grains fuse with egg in the ovule to form a zygote. Depending on the pollen landing, pollination can be classified into two types- 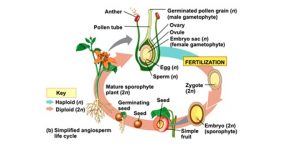 Pollination takes place with the help certain agents so called pollinators such as insects, water, birds, the wind, etc.

Zygote is formed when pollen gets transferred to stigma and the male gametes from pollen grains release and fuses with egg in the ovule. This process of fusion of gametes is called fertilization and the zygote thus formed, divides and develops into an embryo, and later into a seed. The ovary develops into a fruit.

FORMATION OF FRUITS AND SEEDS

The beginning of the growth of seeds is called germination of seeds.